There is no such thing as a celebration without cake.  It was my mums birthday last week, so I thought I would make her a special cake and create a new and exciting recipe for it. Our household loves banana cake, so I decided to use banana as the base flavour. I adapted the recipe from my chocolate & banana loaf for the cake to create something sweet, sticky and moist. Then, I chose to stick with a tropical theme and frost the cake with some whipped coconut cream. The cream helps to balance out the sweetness, and also gives a lovely fresh feel to the cake – and of course nothing beats the texture of lightly whipped cream.

I only recently discovered that you could whip coconut milk after seeing it somewhere online. Most recipes suggest placing the milk in the fridge overnight – so you can also do that beforehand. I’m often forgetful when it comes to preparation the day before making a recipe, so I found that placing it in the freezer an hour before making the cake works well too. When you whip the cream, it won’t be as stiff as when you whip dairy cream, however it is still firm enough to spread on the cake (once the cake has cooled completely). Then, if you put the cake in the fridge after frosting, the cream firms up to a nice and thick consistency. I recommend refrigerating the cake for about 10 minutes or so before serving to get this texture, and cooling it also helps to emphasise its fresh taste. However, don’t leave it too long before serving as the golden colour of the cake does seep through into the cream after a while, ridding the cake of its pure white colour.

I’ve made this cake both in a 6″ (16cm)  cake tin and a 7.5″ (18cm) tin before. Although this doesn’t sound like that great of a size difference, I’ve found that the 6″ is much better for height and frosting the entire cake, whereas the 7.5″ works better for a wider, classic sandwich effect. I’ve included images of both versions below so that you can decide which version you would rather make!

liquid stevia, to taste – I used about 6 drops

1. Firstly, add the coconut milk into the freezer upside down an hour before making the cake to cool it quickly. Then, when you’re ready to make the cake, move the milk into the fridge.

2. Now, add the buckwheat flour, coconut flour, flaxseeds, millet flour, baking powder, and bicarbonate of soda into a large mixing bowl, and stir until well mixed. Then, set aside.

3. Next, add the dates into a food processor, followed by the boiling water.  Blend until a fairly thick paste has formed. Then add in the bananas, oil, cider vinegar and vanilla pod and blend again until smooth. Lastly, add in the flour mixture and blend until a smooth cake batter has formed.

3. Now, divide the cake mixture between your two cake tins (the cake doesn’t rise too much, so for height, fill the tins quite far). Then, add them into the oven to bake for 30 minutes until the top of the cakes are golden and the cakes feel fairly bouncy/spongy to touch. When the cakes have baked, remove them from the oven to cool completely.

4. When the cakes have cooled, make the frosting. Open your can of coconut milk upside down, and pour away the layer of excess water that sits on top of the thick creamy layer below. Then, tip out the thick cream layer and add it into a large mixing bowl. Using an electric whisk, whisk the cream for a few minutes until thick and fluffy. Then, add in the vanilla and stevia and whip again until well mixed.

5. Lastly, get the two cake halves, and spread the whipped coconut cream between them, on top and all over (depending on the cake size) to frost. You can also add some desiccated or flaked coconut on top to decorate. Place the cake in the fridge for about 10 minutes for the cream to stiffen, then slice and serve. 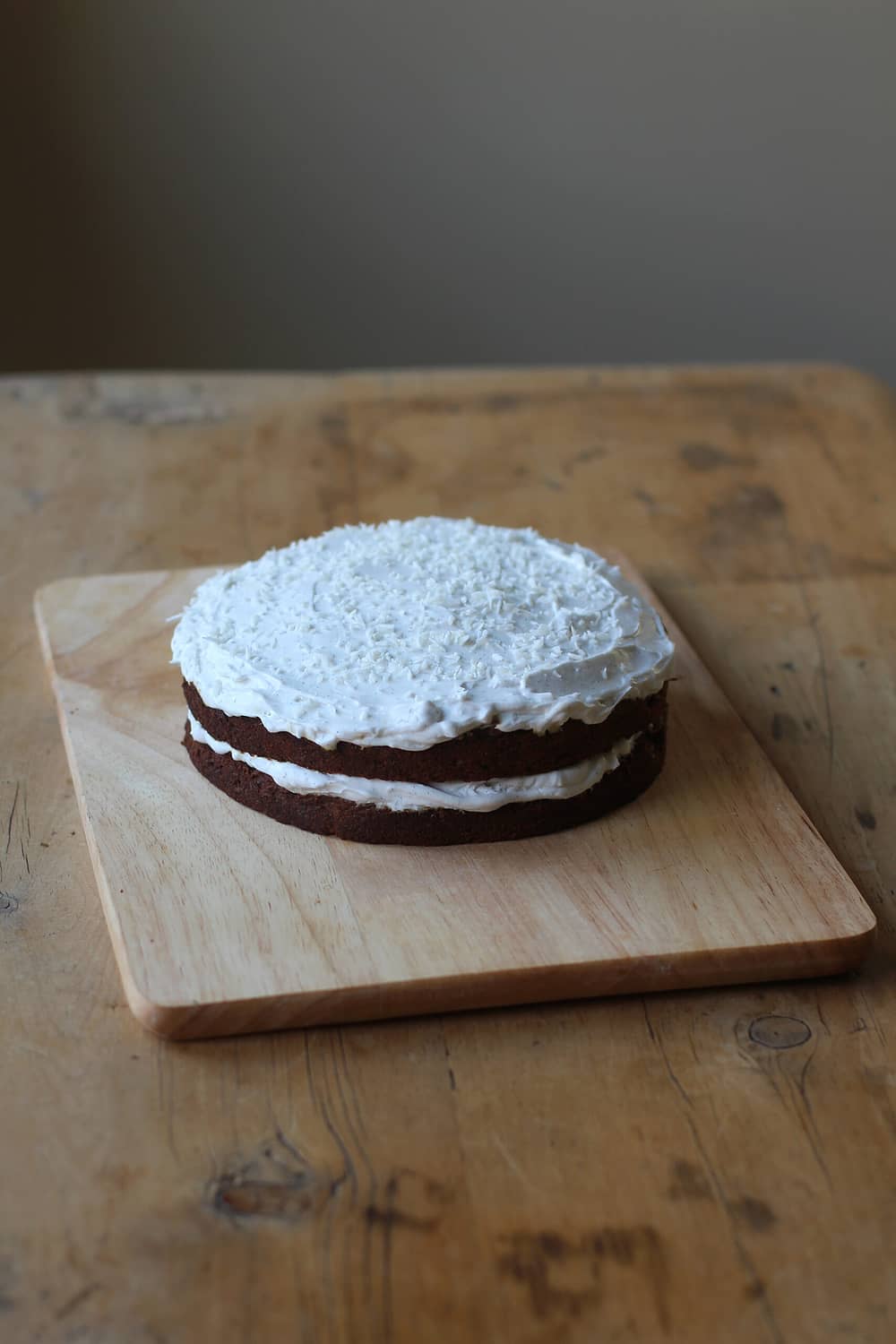 10 thoughts on “banana and coconut cake”